The Human Brain is a Piece of Shit

As I slowly finish off my epic manuscript Human Sexuality for Filthy Apes, I have been given a newfound appreciation for how fundamentally science has failed our species. While most writing on the human brain touts our wetware as a miracle machine, that's just breathless ad copy for highbrow suckers...a cheap emotional high. Did you know you have more connections in your brain then there are stars in the Universe? Nevermind the fact there's no way to quantify "stars in the Universe," the real question is: how many of those connections are you going to use in a few hours when you're texting your friends about the TV show that's on in the background? At least a couple thousand, right?

The reality, of course, is too grim to be stated plainly. Your brain is a barely functional piece of shit, a lump of cellular improv and genetic duct tape. As a navigational tool, it creates a remarkably adequate simulation of external reality -- at least good enough to keep you alive until you can reproduce with someone you shouldn't. That much is undeniably impressive, but it's all downhill from there. As a sense organ, it mostly tunes out every single piece of data your billions of sensory cells try to send you. Worst of all, as a "mind" it behaves like a deranged parasite, alternating between self-deception and self-destruction and leaving even the best of us baffled by our own actions, daily.

So there's that. Entire books have been written on the "neuroscience" of sex, and they are front to back fiction. There's great demand for "popular science" books about the amazing brain but that's because there's a great deal of stupid people. Fortunately, I don't write for them...I write for you, the spooky brilliant and dangerously sexy future mutants of tomorrow.

To be clear, don't think I'm hating on science. No, homey, never that. I have footnotes and studies backing up every single page of my forthcoming book, believe me, I love science. My beef is all these poodles using it wrong. Let me recap for the slowfaces who may lurk among us: The purpose of Science is to belittle the human ego, confound easy understanding and obliterate every hypothesis that it touches. There is no solace in science...if there is, you are most assuredly Doing It Wrong.

This is especially true when chimp "journalists" turn their anemic attention towards the human brain. I don't think it's much of an exaggeration to say that literally everything that's been published in the past decade on that subject is pure horseshit. Again, I'm not talking about the precise experimental language of the actual studies getting published in Nature -- although plenty of those are horseshit, too. I'm talking about a modern mythology based on such fragile data that it essentially amounts to a secular religious belief. Today there is a pervasive myth that the human brain has hardwired areas for specific purposes, which is built on the larger myth that we understand fuck all about our brains in the first place. I will unpack that sentence in detail, starting immediately.

There's a lot of data about the human brain. Neurology is advancing by leaps and bounds, don't misconstrue me. Scientists speak precisely because once you generalize results, you lose any value that your findings have. Today, the most that can be said about current neuroscience is scientists have observed correlations between a specific stimulus and specific measurements of human brain activity. This is not "Semantics." This is discernment. There are fundamental problems with this shallow puddle of a worldview, and they're clear enough to become obvious to Non-Nerd types once you lay them out.

Irrational Faith. Despite advances in neuroscience testing and measurement technology, we still have no proof that our instrumentation is actually showing us something important. To abuse a metaphor, pop sci neurojournalism is about how the human computer system works but the assumption is that we have access to what's really going on. Even if we did, we don't know how to confirm that. Brain readings are new and visually compelling but they're not answers. An fMRI scan doesn't mean we can fathom the operating system of consciousness. For all we know, we're measuring the exhaust system of the computer and puzzling over it like it was source code.

Retroactive Mechanics. Stimulus, Response...it's only simple in theory. Despite all the poetry about how complex the human brain is, curiously, most theories of consciousness still boil down to "When we do this, a light goes on over here." Thus, Broca's area becomes "the language center of the brain," despite dozens of cases where patients without that area could speak and read just fine in their native tongues. The conceit here, stated clinically, is that the specific stimulus in our experiment was the source of the EM activity being measured. Again, this sounds like nit-picking but it's critically important to honest science. Correlation does not imply causality. Nearly all written work by neuro-realists not only reverses that, but takes it one step further: correlation, they glibly assert, is proof unto itself.

Neuro-Fundamentalism. The biggest unspoken assumption, of course, is that the human brain is us -- that you, me and everybody we know is driven and dominated by that single organ. If only it was that simple.

GETTING USED TO NO ANSWERS 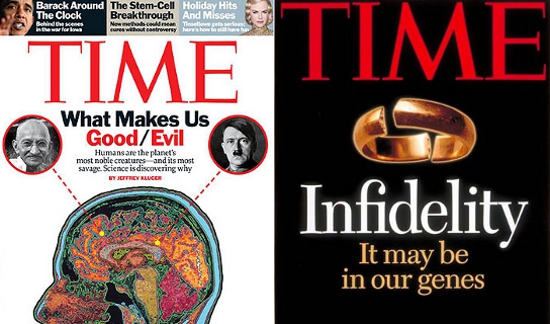 Journalists latch on to narratives, not actual findings, which are too subtle for headlines and too complex for their readership. Subsequently, scientists use these popular narratives to explain their work and seek more funding, and thus do lazy mistakes become institutionalized problems. I'm sure many of you reading this have noticed the tonal similarities between coverage of neuroscence and genetics -- just like every Time headline in the 90's was about how "Who You Are" is determined mechanically by Gene X, Y and Z, the past decade of neurofads have been about the brain controlling us mechanically thanks to area X, Y and Z. We have a lot more similar mistakes in our future, assuming we survive another two generations of over seven billion hungry omnivore killing machines.

There is no working model of the human brain. That's what real scientists mean when they talk about Neurology being in a "pre-paradigm state." Until that gets fixed, the science will have nothing to offer us but surprising results and bad metaphors.

More on the way...meanwhile, be good to each other.