Life in an Occupied Country

"Politics will eventually be replaced by imagery. The politician will be only too happy to abdicate in favor of his image, because the image will be much more powerful than he could ever be." -- Marshall McLuhan

For the past month, I've been pursuing a new obsession: tracing the historical contours of the single largest and most powerful demographic force in United States politics. Despite all the media hype about Red States and Blue States, our American Democracy is completely defined by something else altogether -- the lobby known as Big Apathy.

Everyone I speak to feels strongly that our political process is broken. On this much, Bill Moyers, Noam Chomsky and the Tea Party are all on the exact same page. Why is voter turnout so low in the United States? There's no need to belabor the question with an essay: a majority of Americans just see no point in voting. They don't believe it matters. Put simply, they don't vote because they know better.

Everyone wants to insert a Narrative here, but this is an ecosystem. Be wary of easy answers. Mike Lofgren wrote an excellent essay last week, "Goodbye to All That," and sure enough, he's got a Narrative to sell you, too. It's instructive:

"The United States has nearly the lowest voter participation among Western democracies; this, again, is a consequence of the decline of trust in government institutions - if government is a racket and both parties are the same, why vote? And if the uninvolved middle declines to vote, it increases the electoral clout of a minority that is constantly being whipped into a lather by three hours daily of Rush Limbaugh or Fox News. There were only 44 million Republican voters in the 2010 mid-term elections, but they effectively canceled the political results of the election of President Obama by 69 million voters."

It's a compelling case, so it's instructive to point out he's probably wrong.

One strange constant you'll find in all the opinion polling data on "non-voters" is they're more likely to be satisfied with government, overall, than actual voters. Weird, right? 25% of non-voters claim to be "basically content with federal government," compared to 16% of 2010 voters. A recent Pew study posed the question "Can you trust the government in Washington to do what is right?" 73% of non-voters answered either "Some of the time" or "Never." By comparison, 76% of voters gave the same answers. So clearly, Big Apathy represents a consensus so huge that it reaches into the ranks of Democratic and Republican alike, fusing into a super-majority force for total stasis and constant, impotent bitching.

However, it's hard to place much faith in demographics as a precise science. Copywriting and marketing deals with broad strokes, so your typical Pew or Rasmussen numbers are at least good enough to guess with. Of course, guessing never won a war, and so serious demographic data becomes a valuable trade secret. Karl Rove doesn't dick around with four-figure sample groups - he goes wide and he goes deep.

Which leads us to another, more insidious factor: the 21st Century Ressurrection of Jim Crow. Karl Rove doesn't just do opinion polls, Karl Rove builds 1:1 maps and engages in data-mining projects so byzantine the NSA sends him interns. He does this because he's engaged in a decades-long plan to permanently increase the ranks of Big Apathy. It's important to stress that Karl Rove is far from alone, and he gets invoked here as a symptom, not a cause.

Since 1965, white folks have been steadily losing their majority status, dropping from 89% of the US population back in 1965 to around 65% of the US population today. Every step of the way, the GOP's permanent establishment has been working overtime to make sure that ethnic minorities and urban poor aren't eligible to vote.

From scrubbed registration lists to "challenging" voters on election day, the perpetual Block the Vote campaign has become more overt in the past decade. (The War on Drugs represents a parallel campaign to disenfranchise voters, even more blatantly targeted at minorities.) Up next is the state-level barrage of Koch-funded "Voter ID" initiatives. There's big money behind reducing the population of eligible voters, and big money gets impressive results.

The United States Elections Project is a superb resource for raw numbers, but this particular paragraph is some unintentional dark poetry: 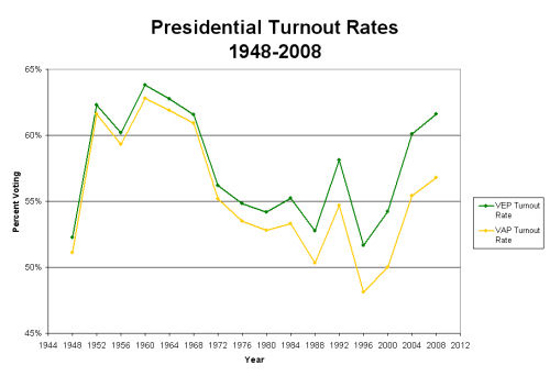 "Voter turnout rates presented here show that the much-lamented decline in voter participation is an artifact of poor measurement. Previously, turnout rates were calculated by dividing the number of votes by what is called the "voting-age population" which consists of everyone age 18 and older residing in the United States (the yellow line to the right). This includes persons ineligible to vote, mainly non-citizens and ineligible felons, and excludes overseas eligible voters. When turnout rates are calculated for those eligible to vote, a new picture of turnout emerges, which exhibits no decline since 1972 (the green line to the right)."

In other words, once you take into account the fact we're systematically denying millions of people the right to vote, those voter turnout numbers look several percentage points better! Yes, a bright, shining new day for Democracy. Here's how to really read their graph: simply observe that the gap between the yellow and green line has been growing larger every four years.

Money corrupts politics - of course - but I'm not convinced money is the real problem here. Perhaps language is. It's absurd for pundits, professors or PR professionals to talk about "fixing" or "restoring" our dysfunctional "Democracy" when history makes it plainly clear that the United States of America was never intended to be much of a Democracy at all. The most serious problems with the political process here in 2011 are design features that are centuries old now.

Simple: the Electoral College system means that our Presidents are chosen by 538 votes. This is significant because statistically, individual votes truly do not matter. It is difficult to argue with cynics when math itself is on their side. From James Madison to Walter Lippmann, the architects of modern American politics have been openly suspicious and disdainful of direct Democracy since the first Constitutional Convention.

When it comes to that point -- to "What now?" -- we mostly throw up our hands in despair, or we change the subject. 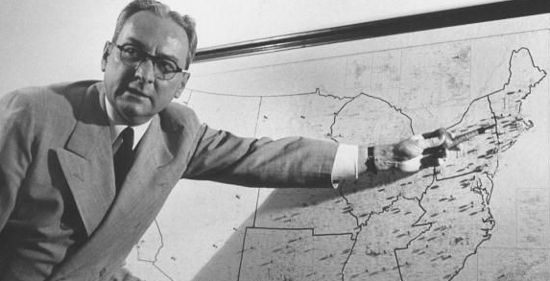 Let's change the subject. The man you see above is Elmo Burns Roper, Jr and his life story weaves together everything we've discussed so far. Roper was born in 1900 and he networked himself into the financial, political and military power bases of a growing United States. He spent over a decade working with Henry Luce, the mythic architect of the American Century, and then joined the OSS with the blessing of Wild Bill Donovan himself. His real legacy, though, was his public opinion polling company, The Roper Center.

When the torch was passed at The Roper Center, it was given to Everett Ladd. "You will decide for yourself what the record shows," he would often repeat to his readers, but yet his writing offers only fully cooked conclusions. Everett Ladd and Elmo Roper are never in the objectivity business. They made a fuss about scientific polling, for sure, but the data has always been subservient to the Narrative. Really innovative pollsters don't just generate spreadsheets, they tell stories and become a part of the political machine, a media priesthood with colorful charts. Ladd was rewarded for his innovations with a long and distinguished career, a parade of Fellowships from Guggenheim to Ford to Rockefeller.

Everett Ladd, in turn, created an accidental protege when he inspired a young Scott Rasmussen, who was in the process of dropping out of the University of Connecticutt in 1975. It would be a decade before Rasmussen graduated college but his time with Professor Ladd changed his life. Today, Rasmussen is a political celebrity, an outspoken Tea Party cheerleader, and one of the most vocal media pundits on life in an occupied country:

"Just 17% of likely US voters think the federal government today has the consent of the governed. Sixty-nine percent (69%) believe the government does not have that consent. Fourteen percent (14%) are undecided. We are united in the belief that our political system is broken, that politicians are corrupt and that neither major political party has the answers." He can also do subtlety: "The gap between Americans who want to govern themselves and the politicians who want to rule over them may be as big today as the gap between the colonies and England during the 18th century."

Desperate times make for strange alliances. How else are we to rebuild consensus? Where is there a "national conversation" that isn't a screaming match? How much are we willing to let go of our own beliefs in order to make strategic compromises? Can we assemble a meaningful power base when 64% of the US population has less than $1000 saved up? What are the leverage points available to the over-educated and under-employed?

Then again, forget langauge, of course money is the problem. Wasn't it always? If we're going to think about our United States as an occupied country, aren't we talking about the fact that Class Warfare is long since over and the top 1% won it all?

More importantly, how can we remind people that facing this reality is not a death sentence but a necessary beginning? How can we import Swaraj to America? As Ghandi correctly observed, "Independence begins at the bottom." Well...here we are. My generation is completely defeated. Does that make us a lost cause, or raw material?