Networks, Bacteria, and the Illusion of Control

Most of the cells in your body are not your own, nor are they even human. They are bacterial. From the invisible strands of fungi waiting to sprout between our toes, to the kilogram of bacterial matter in our guts, we are best viewed as walking "superorganisms," highly complex conglomerations of human cells, bacteria, fungi and viruses. That's the view of scientists at Imperial College London who published a paper in Nature Biotechnology Oct. 6 describing how these microbes interact with the body. Understanding the workings of the superorganism, they say, is crucial to the development of personalized medicine and health care in the future because individuals can have very different responses to drugs, depending on their microbial fauna. The scientists concentrated on bacteria. More than 500 different species of bacteria exist in our bodies, making up more than 100 trillion cells. Because our bodies are made of only some several trillion human cells, we are somewhat outnumbered by the aliens. It follows that most of the genes in our bodies are from bacteria, too. Luckily for us, the bacteria are on the whole commensal, sharing our food but doing no real harm. (The word derives from the Latin meaning to share a table for dinner.) In fact, they are often beneficial: Our commensal bacteria protect us from potentially dangerous infections. They do this through close interaction with our immune systems.

The information in the human genome itself, 3 billion base pairs long, does not help reduce the complexity.

"The human genome provides only scant information. The discovery of how microbes in the gut can influence the body's responses to disease means that we now need more research into this area," said Nicholson. "Understanding these interactions will extend human biology and medicine well beyond the human genome and help elucidate novel types of gene-environment interactions, with this knowledge ultimately leading to new approaches to the treatment of disease."

Neurons in the Stomach 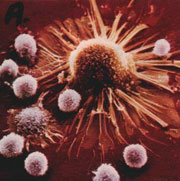 Q Why do we need a second brain?

A Most importantly, to control digestion. It also works with the immune system to protect us from hostile bacteria.

Q Does it use neurotransmitters?

A Actually, 95% of all serotonin in the body is in the gut, where it triggers digestion. Nerve cells in the gut also use serotonin to signal back to the brain. This information can train us not to eat certain foods by communicating pain, gas and other terrible feelings.

Q Does the brain in our heads influence the "second brain"?

A Yes. Butterflies in the stomach arise when the brain sends a message of anxiety to the gut, which sends messages back to the brain that it's unhappy. But the gut can also work in isolation.

(source) A recent article published in Nature Neuroscience reveals that when the stomach is empty, it makes a special hormone called ghrelin. Amazingly, ghrelin travels to the hippocampus portion of the brain and causes new connections to form between brain cells there. As discussed in previous posts, the hippocampus is the memory engine of your brain. More interestingly, when lab animals are injected with extra ghrelin, their learning ability and memory improved.

Symbiotic Bacteria Networks and You 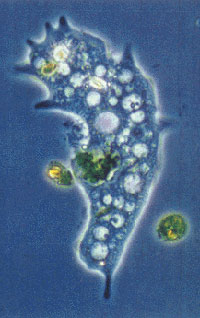 Young kids are forever sticking things in their mouths, but there's a reason for that. A study in the New England Journal of Medicine indicates that early exposure to dirt, dust and bacteria actually helps childrens immune systems develop more effectively. The concept has been coined the "hygiene hypothesis." One study concluded that children who grew up on farms had fewer allergies than their counterparts in urban areas. Conversely, health studies have shown that mothers who kept their children in antiseptic environments were actually compromising their health. Children need to be exposed to the natural environment of threats and benefactors so their immune systems learn to distinguish between the two.

...scientists have determined that 90 percent of the cells in the human body are bacterial. Only five percent of the cells in your body constitute "you," in the sense of your genetic heritage. In relative scale, bacteria are much smaller than your own cells, so they account for only a small fraction of your body weight. Nearly all of these microbes are located in your gut, where they keep you working at optimal health.

There's a new paradigm in microbiology emerging, in which bacteria are no longer seen exclusively as disease-causing killers, but rather as lifelong partners. In a certain sense, they're the immigrants, doing the work the rest of the community isnt up for.

Many of these one-celled fellow travellers are introduced soon after birth. Breast-fed, versus formula-fed, infants show a marked difference in the predominant microflora in their GI tracts. LivingWell Communications president Victoria Shanta Retelny writes in For the Record: "The fecal flora of breast-fed infants is so heavily dominated by the probiotic genus, bifidobacterium, that it is considered the Ã¢â‚¬Å“gold standardÃ¢â‚¬Â type of gut flora, which imparts excellent resistance to infection." On the other hand, "In formula-fed infants, no one microbial group predominates, rendering the system less able to fight infection," she notes. 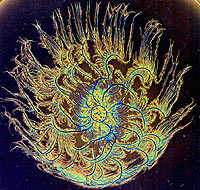 "Ants aren't smart," Gordon says. "Ant colonies are." A colony can solve problems unthinkable for individual ants, such as finding the shortest path to the best food source, allocating workers to different tasks, or defending a territory from neighbors. As individuals, ants might be tiny dummies, but as colonies they respond quickly and effectively to their environment. They do it with something called swarm intelligence. Where this intelligence comes from raises a fundamental question in nature: How do the simple actions of individuals add up to the complex behavior of a group? How do hundreds of honeybees make a critical decision about their hive if many of them disagree? What enables a school of herring to coordinate its movements so precisely it can change direction in a flash, like a single, silvery organism? The collective abilities of such animals -- none of which grasps the big picture, but each of which contributes to the group's success -- seem miraculous even to the biologists who know them best. Yet during the past few decades, researchers have come up with intriguing insights. One key to an ant colony, for example, is that no one's in charge. No generals command ant warriors. No managers boss ant workers. The queen plays no role except to lay eggs. Even with half a million ants, a colony functions just fine with no management at all -- at least none that we would recognize. It relies instead upon countless interactions between individual ants, each of which is following simple rules of thumb. Scientists describe such a system as self-organizing.

By demonstrating the power of self-organizing models to mimic swarm behavior, Reynolds was also blazing the trail for robotics engineers. A team of robots that could coordinate its actions like a flock of birds could offer significant advantages over a solitary robot. Spread out over a large area, a group could function as a powerful mobile sensor net, gathering information about what's out there. If the group encountered something unexpected, it could adjust and respond quickly, even if the robots in the group weren't very sophisticated, just as ants are able to come up with various options by trial and error. If one member of the group were to break down, others could take its place. And, most important, control of the group could be decentralized, not dependent on a leader.

"In biology, if you look at groups with large numbers, there are very few examples where you have a central agent," says Vijay Kumar, a professor of mechanical engineering at the University of Pennsylvania. "Everything is very distributed: They don't all talk to each other. They act on local information. And they're all anonymous. I don't care who moves the chair, as long as somebody moves the chair. To go from one robot to multiple robots, you need all three of those ideas." 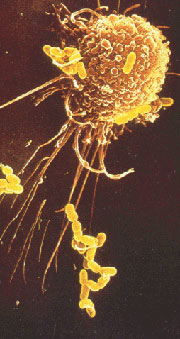 "We would have to accept that bacteria, touted to be our enemies, are not merely neutral or friendly but that they are us. They are direct ancestors of our most sensitive body parts. Our culture's terminology about bacteria is that of warfare: they are germs to be destroyed and forever vanquished, bacterial enemies make toxins that poison us. We load our soaps with antibacterials that kill on contact, stomach ulcers are now agreed to be caused by bacterial infection. Even if some admit the existence of "good" bacteria in soil or probiotic food like yogurt few of us tolerate the dangerous notion that human sperm tails and sensitive cells of nasal passages lined with waving cilia, are former bacteria. If this dangerous idea becomes widespread it follows that we humans must agree that even before our evolution as animals we have hated and tried to kill our own ancestors. Again, we have seen the enemy, indeed, and, as usual, it is us. Social interactions of sensitive bacteria, then, not God, made us who were are today."