"I never liked to get into debates with the skeptics, because if you didn't believe that remote viewing was real, you hadn't done your homework." --Major General Edmund R Thompson 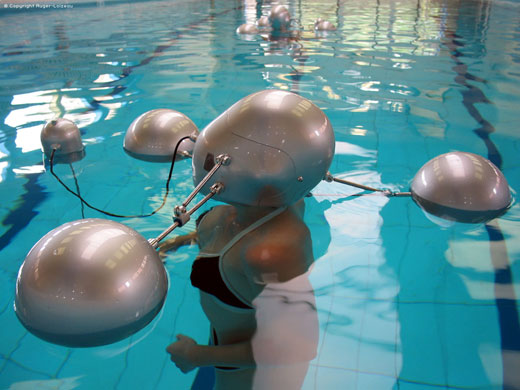 The year I was born, in 1981, the US Government decided magick was real. Well, the "US Government" is of course an abstraction -- specifically, Congressional Research Service was commissioned to do a report on psychic phenomena and offered the following conclusion:

"Recent experiments in remote viewing and other studies in parapsychology suggest that there exists an interconnectiveness of the human mind with other minds and with matter. This interconnectiveness would appear to be functional in nature and amplified by intent and emotion."

That sounds like a pretty accurate description of magick to me. Score one for the weirdos, right?

The illusion of moving images is a puzzle that humans have cracked to great success, and by flashing sequential photographs at 24 frames per second or more, we get to watch movies -- windows back in time. Humans have even learned to "fake" three-dimensional objects with holographic technology.

If it can be engineered, it can be reverse engineered. If these people are "merely" altering their own consciousness and then taking their own imagination at face value, these rituals can be modeled, measured and ultimately replicated. It is obvious, both to skeptics and to practicing magicians, that most of the words, props and staging involved with ritual is a matter of personal preference and probably not integral to the actual effects.

The basic effects we're discussing here need to be stated precisely. Human beings, through mental effort and concentration, can work physical effects in the outside world without any visible or measurable force being exerted. These effects are indeed small and slight, but that's all humans have ever needed.

Psi is worth studying because with enough data and discussion, we can figure out the mechanism at work behind this. The second that's done, humans will be working on replicating, enhancing and amplifying these effects with technology. We've figured out how to pull off some amazing magic tricks with elemental forces of nature. Electricity was once an obscure and controversial phenomenon, too. 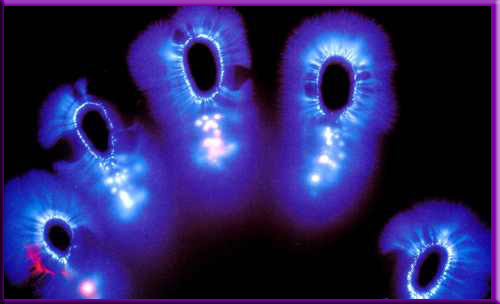 Rational materialism objects that the human body doesn't produce enough energy to account for these effects, but this is thinking on the wrong level of scale. As humans on the surface of a spinning planet being exposed to solar and interstellar radiation, we are constantly swimming in energy fields. It would be a subtle but powerful biological trick to harness this energy.

Biology does that more or less constantly, on every level of scale. I'm not talking "spiritual" or "ethereal" anything, this is simple as photosynthesis, and amazing as the oceans dancing through space with the moon.

Another explanation for psi phenomena that gets invoked a great deal is quantum physics. I suspect that the experimental basis of quantum theory is very relevant, but not the proposed explantions. Even the founding fathers were not satisfied with their own explanations. What did Erwin Shroedinger think of quantum physics? "I do not like it, and I am sorry I ever had anything to do with it," he said.

The reason quantum theory is weird, stated nakedly, is that it contradicts almost everything we experience in our daily lives. Sober and eminently rational men of science took a peek into the smallest level of scale that humans can percieve -- so far -- and what they found baffled them and defied the existing, Euclidian concepts of physics.

The traditional narrative explanation holds that science gradually accepted the fact that at the quantum level, all the rules suddenly change.

Personally, I think that's not a necessary step: science had it wrong to begin with, and at the quantum level, their measuring equipment is precise enough to prove it. The results of the classic quantum experiments -- results that you yourself can reproduce -- are strong evidence for human psi phenomena. In other words, I am claiming that the results of these experiments are determined and directly affected by the scientists who observe them. This is not the same as claiming "we create the universe," just pointing out that our interaction with the universe interferes with our measurements.

Everyone who shaped Quantum Physics disagreed with one another, vehemently and often totally, about the meaning of their own work. Einstien rejected the "spooky" aspects of the entire system, Heisenberg thought that Schrodinger's work was "disgusting," and Schrodinger in turn was "repelled" by Heisenberg's theories.

Not surprisingly, Schrodinger and Heisenberg both proved themselves right. This, in and of itself, is a very valuable lesson that's very difficult to learn. For instance, if you disagree with my version of quantum theory, you're not wrong...but then again, neither am I. 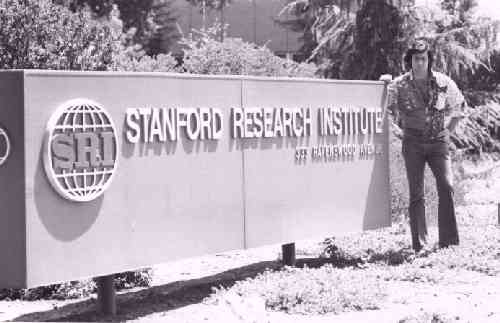 "Often one hears, 'I believe in telepathy' or 'I don't believe.' But what does this really have to do with belief? That is not a scientific formulation of the question. We need to research those problems scientifically." --Lazar Soukarebsky 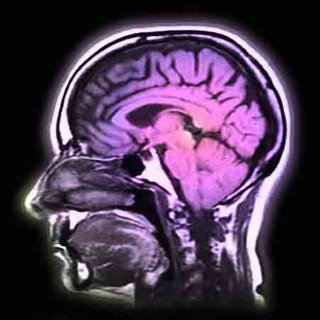 In 2008, do we have the technology nescessary to radically alter the perception and thoughts of other human beings, without their knowledge?

We live in a world where many technological advances are supressed, either by military classification, corporate secrecy, or vested interests who would be threatened by change. However, based on limited knowledge through de-classified and publicly available resources, it looks like the answer is a definite yes.

The two most common methods of forced consciousness change are electromagnetic signals and pharmaceutical drugs, and both methods have long, colorful research histories involving military, religious, and corporate forces. However, it's worth considering that the media environment itself provides the most important technology of control, hidden in plain sight.

This is even more signifigant when you consider that the science of memetics is still very much in a pre-paradigm state. There's no working explanation of how memes actually transfer and replicate themselves, and no functional description of what a "meme" even is.

Most proposed theories are biological metaphors: language as a virus, for instance. Most of these metaphors hold up beautifully, especially viewing human culture as a stigmergic communication network, such as an ant or bacteria colony. Stigmergy is the invisible system behind swarm behavior, where critters alter their environment to leave cues for other critters. There's no central planning, but the behavior that emerges will appear to be intelligently guided.

There's a simpler and more disturbing possibility, based on the 1950s research of Herbert Krugman. He discovered early on that television watching induces a shift towards right brain dominance in human primates. This phenomenon also triggers the release of endorphins, and seems to indicate that television is literally and physically addictive. If this is the case, then nearly anything that goes on a TV screen would have powerful mental and physical effects.

A number of eminent scientists have proposed theories of new fields in order to explain psi phenomena. Rupert Sheldrake

has outlined remarkable research into morphogenetic fields, which enable instantaneous communication over vast distances. Another quality heretic is Ervin Laszlo, a very respected man who's probably lived far longer than some would like. He left the Club of Rome, disgusted with their elitism and technofascist beliefs, and then added injury to insult by publishing "Science and the Akashic Field: An Integral Theory of Everything,"

which suggests that our Universe shares background information fields of zero point quantum fuzz with every other possible Universe, simultaneously. 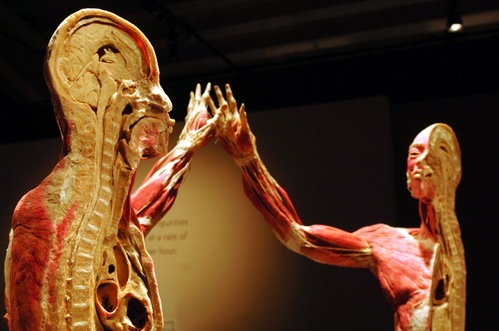 Perhaps it's nothing so grandiose. I've recently been re-reading Marvin Minsky's book "Society of Mind,"

which is a collection of single-page essays about the component parts of consciousness. Minsky was an early AI researcher, who has been guided by the assumption that consciousness is the sum of thousands of small, unremarkable parts: simple biological calculations, energy transfers, and information coding. Although I don't buy his argument, I've found the book is more compelling when read in reverse: as a working description of how a whole society's mind would actually work.

Questions of entrainment lead to questions of scale. If other humans can exert powerful unconscious effects on us, what about the larger environment? Earth is constantly radiated with energy from the sun, other stars, and ambient galactic space weather. In the history of parapsychology research, though, experiments indicate that all this energy flow is not enabling psi phenomena. In fact, most sources agree that exposure to ambient energy fields inhibits psi strength and performance.

"Of particular interest here is the growing literature in parapsychology suggesting that perceptual psi, both in the lab and spontaneously in life, improves as GMF fluctuations decrease." --Dean Radin, The Conscious Universe

"When you're inside [a Faraday cage], a psychic, for example, has their performance increased by a thousand fold. A Faraday cage shields you from the electromagnetic radio waves, allowing only extremely low frequency (E.L.F.) magnetic waves to get through. I don't think there's a psychic warfare research lab that doesn't make use of them today." --Andrija Puharich, random online interview...bear in mind his credibility is roughly on par with an average politician.

It should come as no surprise that some people have exceptional psychic skills -- the same is true for baseball, music and all other forms of human endeavor. However, if psychic ability is a basic human potential, then this material should be useful for anyone interested in this phenomena, regardless of "natural talent."

Mystical traditions are full of conflicting dietary restrictions, and many trance mediums were vegetarians who avoided refined sugars. In the absence of any biological mechanism for psi, it's impossible to judge any of this tradition except for personal experimentation. If psi is related to DNA biophontonic effects,

then perhaps the sugar ban is not superstition, as refined sugar has been shown to reduce the biophotonic emission of human DNA considerably. The health implications and even the cause of DNA emitting biophotons remain unknown.

All of this, of course, is ultimately conjecture in the face of the unknown. That's a good thing, too. Despite billions of dollars, global resources, and classified technology, the monkeys who think they're in charge aren't any closer to The Truth than the rest of us weirdos.

This much we do know: don't bet against human potential.

Perhaps this is all self-delusion. Of course I want to believe human beings have psychic powers, but that's just hippie optimism from an overgrown kid who read too much X-Men. With both neurology and physics in a transition state, I'm selectively cherry-picking anomalous facts to make my fantasy sound more "scientific."

Still: Most of you reading this have psychic mutant superpowers you're currently unaware of. Unlocking them is a means of mentally and emotionally enabling yourself, as well as doing the research to understand your abilities and better manipulate them.

There is nobody else to do this research for us. There are no trustworthy experts -- in fact, most of the best writers in the field are con artists and anonymous pseudonyms. A revival of "scientific illuminism" has never been more important than it is in 2008. Although there's a great deal more money in gathering followers, our best tool for meaningful progress is communication among equals.

If you can hook people and make learning sexy, that's magic at the highest level. When lies become true, most humans call that prophecy, some folks call that public relations, and a few carnival hoodlums recognize a great pitch. Every idea already exists, but few of them have ever been pitched persuasively.

I know what you're thinking. 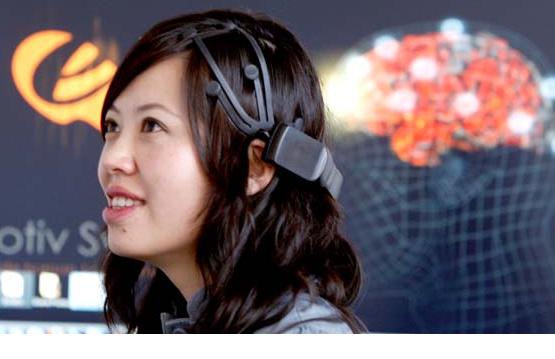