"Since August, investigators with the Police Department and the Federal Bureau of Investigation have monitored the online efforts of activists to bring demonstrations to Wall Street." -- NYT 9-26-2011

It's easy to write some critical theory noise about asymmetrical emergent rhizomes, and it's easy to wish the #Occupy movement was more clearly defined. Jagged edges are good, though: there's no reason it has to be simple. Media training makes soundbites easy to digest, but "easy to digest" only leads to "quickly forgotten" here in the age of Cognitive Overload. Bottom line: as an exercise in non-violent democracy, the #Occupy movement has been a fascinating success so far.

Despite the clear communication, advance planning and the public nature of the event, most people still have no idea what is happening. Spectators who lament the poor organization of the Wall Street protest probably don't know about the test run on September 1st, 2011. Seventeen days later, the operation was officially launched. When Wall Street failed to surrender within 24 hours, most observers declared the whole thing a failure and moved on.

David Karpf eulogized it like so: "Anarchists and radical organizers have a bit of collective amnesia with regards to the "Battle of Seattle." The kids in black bandanas were only a very small part of the coalition that shut down the city in October, 1999. Their acts of childish violence against a Starbucks may have become the lasting public image of the event, but they were hardly representative. The bulk of that anti-globalization protest was composed of labor unions, environmentalists, and other organized progressives...The culture jammers are practicing activism-as-public-art. The community organizers are practicing activism-as-public-process. Both have their place, but we rarely spell out the differences. And they'll lead you in very different directions."

Clearly they're doing something right. Wall Street remains occupied, two weeks later, with a steady stream of celebrity guests and spectacle-worthy abuses of power. The protest has also taken on a larger scale as an open source movement around the country. This is more fascinating and more powerful than the Wall Street action itself: the moment when a movement catches fire.

It's important to decentralize quick, because a single location would be too easy to co-opt and control. In NYC, police essentially make arrests at will and are clearly making those decisions based on a strange political logic. Law enforcement attempts at containment have been a SNAFU circus so far, whether that's because of byzantine red tape complications or just internal disagreements remains to be seen. Still, Anthony Bologna provided a whole week of headlines, and for any protest action, the police are a strategic asset. The media, on the other hand, are a strategic threat.

Lawrence O'Donnell and Dylan Ratigan are not allies, they are a predator species. They are also incredibly helpful. Modern reality is fractally packed with double binds like this, and no movement can sustain the analysis paralysis of evaluating every opportunity for hidden traps. The immediate future is going to make a lot of people very uncomfortable, and that's a good thing.

There's a lot being written right now about "selling out" and "getting co-opted" but #Occupy might prove too slippery and too strong for that Nixon-era smear campaigning. Besides: do you say No to Susan Sarandon? What are we to make of change agents like Hazem Sayed showing up to the campfire? He bought a lot of headlines for just $900 bucks, back in the dark ages of March 2011, when he bribed his way to the front of the line for an iPad2 at a media-saturated "Launch Event" -- it worked then, too:

Terrence O'Brien"Intrigued by the man who was willing to pay so much money just to get to the front of the line, reporters began lining up to talk to Sayed, who wasted no time plugging his company, [whatever], and its latest app, [whatever]"

Now he's hyping up Vibe, a "smartphone messaging platform" that posts anonymous messages to localized lists. These messages can be set to disappear minutes or hours later, allowing for real time communication about police actions and logistics problems. Sayed made the tech news again for flying out to the Wall Street occupation with flyers about his free application. It's a beautiful application of stigmergy -- the ordering principle that keeps ant hills running like armies. No matter what you might think of Sayed's marketing intentions, his model is a smart one for protest situations and his technology has proven useful.

There's going to be a lot of odd contributions like that. Expect more assistance from the Grey Zone -- self-promoters, ideological lunatics, shady billionaire types -- as any serious national movement gets off the ground. That's going to be unavoidable. Or at least, just as unavoidable as internet commentators declaring the movement "dead" because someone suspect gets involved. What if Adnan Khashoggi is caught writing checks? I think that the #Occupy movement can and will survive that...and no matter what, it will certainly be a weird year from here.

There's a lot being written right now about what the #Occupy movement must do. What it should be, where it all needs to go. Yet somehow, everything that looked like a mistake at first has unfurled into an advantage. All any single #Occupy cell needs to do is hold their ground for another night, and plan to make tomorrow bigger and better. It's easy to write a sneering caricature of a Tea Party rally, but it's interesting to note how many reporters wrote mocking hit pieces on the Wall Street crowd that all wound up being completely different. It's hard to get a bead on where the consensus is -- but the occupation itself is the whole message. Nobody on Wall Street is confused about what it means, at least.

The Anarchists sing beautiful songs, but make no mistake: there is a management team in the mix.

Malcolm Sacks: "I'm hesitant to say that it's non-hierarchical, that there's no leadership, because I do really think that there's a core of people - the media and press team - who are doing a lot of the organising and shaping the public image. We tried to talk to one of the media folks about the problem of there not being people of colour, and the problem of people of colour not necessarily feeling comfortable participating, and there was resistance on their part to acknowledge that. They deflect criticisms by saying, 'if anybody want's to get involved they can get involved. If they want to be represented, they just come and they can do it too.' I think it's denying the real power dynamics that are at play now."

"I Am the 99%" is powerful stuff, and it's also a heavy responsibility. There are a huge amount of voices to be taken into account to justify rhetoric like that. Building consensus is a whole different box of tools than organizing protests, it's true. That doesn't necessarily mean that some folks in Topeka, Kansas need to read up on Saul Alinsky in order to start a local #Occupy chapter. The room for mutation is a big part of what makes this phenomenon so interesting. As Burroughs croaked: "Any number can play."

Still, giving advice on "building successful movements" is dishonest. It all boils down to the same tautologies in a numbers game -- the further your movement spreads, the more leverage you'll have. That's not unlike Wall Street's advice for the unemployed and foreclosed: the key to making more money is just increasing your monthly income. There's a lot of free advice out there, and none of it is much more helpful than that.

#Occupy will become what it will. All that's left is waiting and watching and holding the square.

Because we always quote McLuhan here:

PLAYBOY: How does such environmental programing, however enlightened in intent, differ from Pavlovian brainwashing?

McLUHAN: Your question reflects the usual panic of people confronted with unexplored technologies. I'm not saying such panic isn't justified, or that such environmental programing couldn't be brainwashing, or far worse â€” merely that such reactions are useless and distracting. Though I think the programing of societies could actually be conducted quite constructively and humanistically, I don't want to be in the position of a Hiroshima physicist extolling the potential of nuclear energy in the first days of August 1945. But an understanding of media's effects constitutes a civil defense against media fallout. 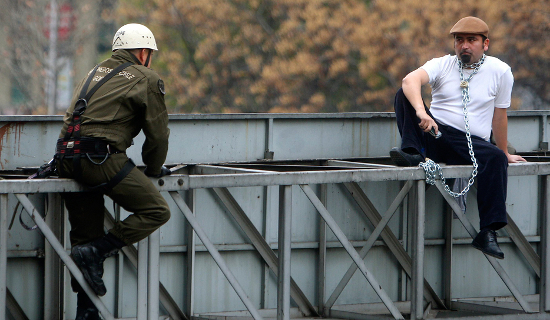