Our Interview with Godforbid, Lead Singer of That Handsome Devil

Drinking on the Coast of Maine, August 2007 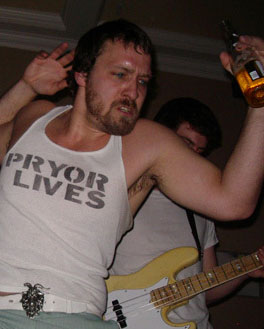 There's a lot of rumors and legends about Godforbid. As the actual human being behind that name, do you think that's funny, irritating, or just cosmically inevitable?

I've worked for that since grade school, once you set the tone: folk's memories do the rest.

Not to be too blunt, but how are you possibly roaming free? How do you get away with being the being you be?

I move around a lot, have great discipline, always keep a job, and a strong grasp on consensus reality. You must be able to communicate with people in the terms that fit their heads if you want to truly manipulate the moment. There's been a handful of nights in holding cells and city jails, but I blame that on the bottle.

Do you think you could adapt to rural life or are you an urban primate?

I actually lived in a converted grain silo on a farm in Lafayette Colorado for about a year. I remember trekking miles in knee high snow to get to the liquor store. I eventually teamed up with a freelance pharmacist as hired muscle, following hippy bands, sleeping in the back of a pick-up truck filled to the brim with brain changing chemicals.

My apartment must remain a constant, but when I step out that door I want to be in the middle of everything, riding high atop the variable, I'm a city boy.

Do you think you're mastering your relationship with the bottle or does she remain in control? Does it matter either way?

We expect and except different things from the different relationships in our lives. Dogs should greet us, slobbering with happiness as we enter our homes, cats should meow with casual indifference. When I touch the bottle to my lips, I'm aware of the chaos that will ensue. I am, however, in control of when I choose to lose control. 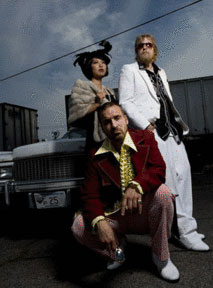 Who would you say is a bigger influence on you: James Brown, Tom Waits, or Timothy Leary?

I had actually established my sound before I had ever listened Waits, folks kept bringing him up and saying we sounded alike and I believe I must have heard him in the background confusing him amongst the likes of Leonard Coen and Nick Cave. It was about 98 when I first really listened him; I was amazed and felt as if he were reading from my notebook if not improving upon it, with a rumble near my own. I immediately stopped listening. One of my first albums was The Muppet Movie soundtrack, and I believe I was more influenced by Ralph the Dog, and Doctor Teeth. (The former of which supposedly caused Waits to bring a law suit against Henson for likeness in character, the latter I find sounds like Dr. John who I've also been compared to. ) He's fucking great though, its just an idiosyncrasy of mine; when compared to an artist too much, or if I believe our lives/art run too near parallel, I try to stay away, unless it's too late.

Of course I had heard James Brown here and there forever, but I wasn't one of those kids who was all about nostalgia. Most shit I was into was current, some damn good albums came out at key points in my life. Not till kids started seeing live shows with the dancing and bravado was that brought up. It makes sense.

Leary's the fucking man, its odd how one influence bumps you to another; I've been in a definitive direction for as long as I can remember, and I can remember a long way back. The information presents itself to you only as you're ready for it, things couldn't have happened any other way, so why worry. I'm off track, I read a lot of Leary, but I trust no ones experience over my own. I'm an advocate of self-science.

Q: Point blank: is the Game Over for the human species? Do you see hope on the horizon or is this just one big, long Final Party?

Hope by definition has no basis on fact; I'm a doer, fuck hope. That being said, when we find solace in things like hope we get comfortable, and there is no evolution in comfort. My opinions change constantly. I have no personal allegiance to the human species. I see us more as another piece in something larger; for all I know our reason for being was to blow each other to smithereens. Maybe make a big enough boom so that we slightly shift the moon, allowing sunlight to reach some new rock.

Was the Guitar Hero connection just a regular promotion, or did you guys know in advance it would plug you into the youth of America?

We had no idea how big it was. I used to have to risk arrest to get in the living rooms and bedrooms of the American teen. Now I travel freely through the wires right into their collective consciousness. It'll make transition to my Friday night variety show that much easier.

I have to ask: will there ever be another Alaskan Fishermen album?

Hell yes, it's almost done. We're all very independent people, but have great respect for each other, and that's the thread that keeps us in contact.

What do the The Kids need to hear the most, these days?

Things are out there, and if it's not in their nature to question what they're being fed, that's fine, they're food.

Do you think our generation is going to see commercial space travel become a reality?

Old rich bastards wanna live out every damn fantasy they had in their crisp collard childhoods. They hunt two headed tigers in Zimbabwe, swim amongst the great fresh water pigmy whales of the river Nile, they can't wait for safaris on moon rovers, spearing giant worms, trading gems for hot moon-sex with blue breasted natives. If rich old bastards want something, it happens. Eventually the Earth will be a ghetto, populated by those too broke to jump ship.

What's the best way to deal with police? There's a couple things one must consider when interacting with the law. The biggest being circumstance the second being location. If guns are drawn, and you've done anything less than murder, I suggest full compliance (unless foot escape seems possible, than why not? Besides, I highly recommend at least a week in jail to anyone who prides themselves a creator / explorer) If it's murder you're going down for, fuck it; run one way, shoot the other. For the rest of us whose liberty driven lives consist of routine considered against the law, (i.e. public drinking / drunkenness, drug use / sales, graffiti, smiling too much etc) don't get into any pissing contests, keep your head straight. Remember, these are the same kids you've outwitted since grade school, in fact, most of them have been longing for your acceptance so much, they've taken on this vocation for its token praise.

Do you have any advice for young rappers other than "kill yourself"?

How exactly did you manage to assemble one of best bands on the East Coast?

A beautiful women needn't fuck every moron that throws an eyeball her way, she can pick and choose, everybody wants to fuck her. That and dumb luck.

What do you consider the best prank you've pulled off so far?

My survival, but soon there will be pranks so big we'll all get to live out the punch lines...just give me your money.

If you haven't already, check out the music. It is really damn good. It has a 100% success rate with everyone I've introduced it to so far. Let me know how it works out for you.