So today I'm going to sit down and write up a list of the most important and valuable books I can think of. Feel free to chip in with your own suggestions -- in fact, I'd really appreciate it if you did. I realize that for some people, registering with our website in order to post comments is more hassle than you want to deal with. I am sorry for that, but it's the best system to deal with spam, plus we run a forum that's overstuffed with new data and brainfood to reward you for the hassle. Thanks again to everyone who reads Brainsturbator -- I'm grateful for your time and your patience.

, by Robert Anton Wilson. Wilson has blessed our species with a lot of really damn good books, and I personally owe him a great deal. It was difficult deciding upon what single title I would recommend -- since the Illuminatus! Trilogy

is too weird for most people, Ishtar Rising

is too controversial, and Quantum Psychology

was rooted in the foundations laid out in Prometheus Rising, I settled on this title. It's a workbook, and each chapter ends with exercises based upon the concepts that were discussed. As I have mentioned before, I thought I understood this book and "got it" for two years before doing the exercises and realizing how meaningless "an intellectual grasp" of a subject really is. In other words, I wasted two years -- don't repeat my mistake.

, by Howard Bloom. I would recommend you check out Bloom's essay "Reality is a Shared Hallucination" first -- if you dig that, then this book will blow you away. Bloom has a rare gift for re-united threads from dozens of different, "separate" disciplines of science into cohesive, headfuck insights. Every chapter of this book is solid gold. I feel I should also mention that of all the books I've lent out to my friends, I get the most negative feedback on this one, so not everyone agrees with me that Bloom is dead-on.

The Secret Teachings of All Ages

, by Manly P. Hall. We've discussed Hall before, and this book still stands up as a masterpiece decades after it's author passed away. The single best introduction to the history of the occult you can possibly find. 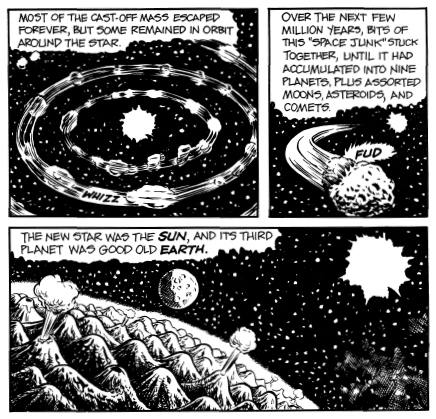 The Cartoon History of the Universe

once a year or so, but in my opinion nothing comes close to the greatness of Larry Gonick's series The Cartoon History of the Universe. It is (mostly) beautifully illustrated -- there's a few issues in Volume Two that were clearly rush jobs, or perhaps a long drug episode -- and it's also funny and informative.

Gonick's scope is huge, and he really does deliver on the title premise. Not only that, but the History itself is accurate enough to get me through high school without paying any attention to the actual textbooks I was supposed to be reading. Gonick covers damn near everything, and he does it scrupulous accuracy and good humor. Your kids will thank you for buying these books.

In looking up the links for these books, I found out Gonick has recently published the first volume of what he calls The Cartoon History of the Modern World, which apparently covers from Chris "genocide" Columbus to the US Constitution. I haven't read it, and I would hesitate to recommend it, since some of his books have been very rushed and frankly disappointing. If you want to pick it up anyway, here you go:

The Cartoon History of the Modern World, Volume One

: There's No Such Thing as Hypnosis?, by Stephen Heller. I re-read this book 5 times in a row and put it down. I haven't picked it up since because I'm still unpacking everything that got blasted into my head. Mr. Heller has written a book of singular depth, reminding me of the experimental "horror" novel House of Leaves

(which I also recommend highly) with it's reflective layers of meaning and simultaneous perspectives. I read this book 5 times and I still couldn't say if it was the most empowering book I ever read, or just the most disturbing. Let me know if you figure it out.

Coercion: Why We Listen to What "They" Say

, by Douglas Rushkoff. I used to recommend the Edwin Bernays book Propaganda to people who wanted to understand the media control system and the power of mass persuasion. I recently read Rushkoff's book, and it was a great relief. After all, Bernays wrote his manual back in 1928, and Rushkoff offers a much more evolved and straightforward look at the same mechanisms. Also, fuck Bernays -- neither he nor his descendants deserve your money. Rushkoff is a very busy and insightful mutant and his work is worth your time and money. If you still want to read Bernays, here it is for free.

, by Jim Keith. Although Keith constantly makes conclusions or insinuates connections that seem insane to me, he really was among the best authors the "conspiracy theory" field has ever seen. I dearly wish that people would pay him even a fraction of the attention that gets paid to more sensational bullshit like William Cooper's, uh....classic. This is Keith's finest book, exhaustively researched but still a very short read -- there is no wasted space anywhere, this is one of the meatiest books I've come across on any topic. And I think you will agree, this topic is important and fascinating, not to mention over-saturated with mere speculation and poor thinking.

, by Daniel Odier. As much as I love Burrough's writing, I believe that this collection of interviews is the most accessable, and dangerous, summation of his work.

Dumbing Us Down: The Hidden Curriculum of Compulsory Schooling

, by John Taylor Gatto. Brainsturbator has discussed the real goals of US education once before -- and that article needs to be re-written because it honestly sucks -- and Skilluminati recently posted some John Taylor Gatto essays. This book is the best of it's kind and Gatto has more credibility than any critic since Jonathan Kozol

, by Jeff Wells. Yep, this book is not even out yet. However, the single best writing I have found anywhere online about these topics is from Jeff Wells, who runs a website of the same name. This book will be a collection of his best essays, expanded and organized. I feel perfectly confident saying this will be best book on deep politics, occult history and paranormal events that has come out in years.

UFOs and the National Security State

, by Richard Dolan. The best-researched, most-credible, least-bullshit UFO book. Can I give a better recommendation than that?

, by Jacques Vallee. This book is powerful medicine. Almost the entire tapestry of UFO belief and mythology in the United States, here in 2007, is the result of a deliberate disinformation campaign that Jacques Vallee records in clinical detail here. From Roswell to Dulce to the Greys, Vallee traces how carefully managed "leaks" and con games grow from rumor to legend to commonly accepted fact. This book will disturb you because it is emphatically not a "debunking" but actually opens up even darker possibilities than hostile aliens.

, by Terence McKenna There is more food for thought about the UFO Phenomenon in this book than you will find in 100 books that are actually about the UFO phenomenon. McKenna was an honest and fearless thinker, and this book is truly outstanding.

I use that term in the most positive and enthusiastic possible sense. These books are in a category unto themselves and were instrumental in shaping how I see the Universe.

, by James P. Carse. Pound for pound, I have never found a book this potent. Very short read that altered my life and whole conception of the Universe forever. If you're in tune with Brainsturbator, that's probably all you need to read. Out of all the titles listed here, get this one first.

, by Hakim Bey. Although this entire book is freely available online, I found myself re-reading it so often that I've since bought three copies, one of them was literally read to death while I was bouncing around the country in my irresponsible youth.

, by Peter J. Carroll. We've discussed Carroll before -- read some excerpts of his work right here, and download the first chapter of this book right here.

, by The SubGenius Foundation. I almost feel embarrassed saying it, but this is the greatest book I've ever read. Nothing touches this and I think it will be a while until a more complete statement on the human condition can be formulated. I realize that almost sounds sarcastic, but it's seriously that good.