Saving the World Starts in Africa

Africa has insane problems. Most of them are thanks to Europe, the US, and China. From the nightmare captialism of King Leopold to the 5.4 million dead in the wake of the Second Congo War, the connections between First World invasions and ongoing problems is never less than obvious. The second wealthiest nation in the world, Equatorial Guinea, remains a poverty-stricken wasteland despite a GDP of over $12 billion. (Population? Just over 500,000 people, which is smaller than the state of Vermont.)

I should also mention that nearly 75% of all AIDS deaths happened in the southern half of Africa, but I'm done with the brutal facts for the rest of this article. I'm not laundry listing statistics to stun you into helpless depression, just giving a quick overview. I firmly believe that saving the world starts in Africa. I'd like to invert our assumptions and look at things differently -- how can problems be opportunities?

On the face of things, the lack of infrastructure is a huge problem, right? I'm going to disagree. Here in the United States, our infrastructure is the problem. We have failed strategies and designs literally built into our environment on a national level. Our energy dependence on petroleum, for instance, has reduced the world's richest nation to the brink of collapse.

Rather than moaning about the sheer cost of building Africa up "to our level," it's worth considering that "our level" is not an advancement, but a mistake. Africa has the opportunity to start with a clean slate and do things right. This is often referred to by tech-heads as "Leapfrogging" -- here's a great summary from the amazingly good book Worldchanging

Developing nations don't have to play catch-up: they can adopt new technologies and tools -- not always from the West -- and use them in their own ways, skipping old or outmoded methods and embracing brand-new ones... Leapfrogging means more than simply adopting new gadgets. The red-hot core of the concept is freedom. Being poor or lacking access to to established technologies can liberate individuals and communities to embrace the new, because they haven't yet poured money into the old." 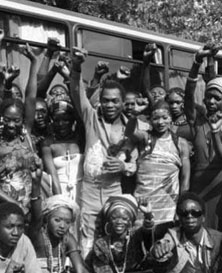 Let's be blunt: the World Bank and the IMF want Africa to serve them. It has nothing to do with African independence. The contracts and terms are clearly engineered for maximum profit -- and this has been clear for over a decade. The history of Africa is the fight for human freedom, from Steve Biko to Emperor Haile Selassie I. (Side note: If you're not familiar with long, strange connection between the United States and Liberia, get familiar.)

Anarchy is not violence, folks. Ghandi was an Anarchist of sorts -- the proper term is philosophical anarchism. Ghandi didn't respect state power, but he wasn't rushing to destroy it, either: "The state evil is not the cause but the effect of social evil, just as the sea-waves are the effect not the cause of the storm. The only way of curing the disease is by removing the cause itself."

Due to resource imbalances, humans are unable to live in peace on Earth these days. The solution to this problem is not more government -- it's closer to John Robb's recent work on Resilient Community.

"The most effective vaccine against child death in Africa is a glass of clean water." Kevin Watkins, author, UN HDR, 2006

Technology needs to be open source. If I figure out how to extract drinkable water from the air, for example, my first thought is not "how can I make money off this," but rather "how can I get this spread as widely as possible in the shortest amount of time?"

DISCLAIMER: I disagree with most Western economists on the issue of jobs. A "job" only adds value if it contributes to the culture and makes the employee into a better person. 1. If someone is working at a Taco Bell, I think that works against the entire culture. It makes people hate life and contributes to world problems, and it doesn't pay you much either. 2. More cops on the street does not add value to a culture -- it just leads to more arrests, as surely as passing laws only leads to more laws. Again, bureaucracies, governments and corporations are not a solution, they are an ongoing and serious problem. I'm open to conflicting evidence -- if you know of government or corporate good deeds in Africa, let me know.

Don't believe me: just check out Forbes Magazine, folks. They're reporting that "renewable energy" not only saves money, it has also "generated about 90,000 jobs." Fast Company has two good recent reads I recommend: first, an entertaining look at the hard work of Van Jones, and second, a cautionary tale about William McDonough.

Erik Hersman puts it much more bluntly: "Our challenge is to get people to realize that there is a real competitive advantage to developing and testing software in Africa. After all, if it works in Africa, it will work anywhere." He should know: he's one of the designers behind the Ushahidi system, a truly amazing platform for "Crowdsourced Crisis Information" -- learn more here.

The Hippo Roller is another great example of truly useful design. It provides a solution without depending on any other infrastructure or technology. Check out this excellent photojournal about Project H for an example of how the Hippo Rollers can be distributed and re-used on the ground level.

"Women produce more than half of all the food grown worldwide, yet own only two per cent of all land and get only one per cent of lending to agriculture." -- Gawain Kripke

Poor people aren't poor because they don't have money.

Here in the wastelands of consumer capitalism, luxury becomes nescessity. Everything scales up, for no good reason. The Leatherman was a perfect tool, it doesn't need lasers, instant messaging or a GPS transciever. Remember, only three lifeforms value non-stop growth above all else: governments, corporations, and tumors.

Consider the One Laptop Per Child program: their original design included a hand crank to power the computer in remote areas. Why doesn't my Dell have that? Why isn't that a standard feature on every laptop on Earth? It's about portable computing, right? Well, wrong. The model here in the US is "portable computing" between a fully wired home to a fully wired office to a fully wired Starbucks. We live in a techno-bubble so pervasive it can be hard to see...until it's gone.

Sustainable has to mean self-sufficient.

"The opposite of natural is impossible." -- R. Buckminster Fuller

Speaking of green, here's a dose of visual data from the World Bank. 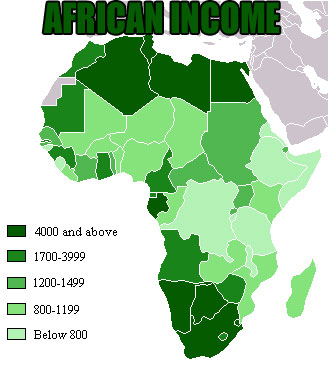 If we "fix" Africa by remaking America, we're making things worse. Africans do not need to "upgrade" to a culture where everyone has to compete for meaningless jobs in order to get food and shelter. True wealth is an abundance of resources, knowledge and time.

I don't want to make this sound like us genius and enlightened first world crackers need to bless the Third World with our profoundly cool-looking ideas. This is a two-way conversation. Frankly, the Third World has a lot more to teach us, in terms of useful skills for the future. I'm not a Luddite, though -- just saying we need to figure out a more efficient and less polluting method for manufacturing cell phones.

Africa's future, for better or worse, is in mobile communications technology. For a detailed and visionary look at the potential of this emergent system, I highly recommend Erik Hersman's PDF report on The Africa Network.

If this sounds authoritative, don't be fooled: I'm still just beginning to learn about this and I've never even been to Africa. I left out 10,000 things.

For a weeklong overview of sustainable ecology in one sentence format: check out John Todd, Open Source Ecology, Movement as Network, Amory Lovins, Rocky Mountain Institute, Bill Mollison, Permaculture, Appropedia. I also highly recommend the book Worldchanging it's currently 8 bucks on Amazon and it's over 500 pages of portable inspiration and brainfood.

I've mentioned Erik Hersman twice already. He's also the mind behind one of my favorite websites right now: Afrigadget, "about low-tech ingenuity and microentrepreneurs in Africa." One of the most inspirational and thought-provoking finds I've made in 2008, by far. 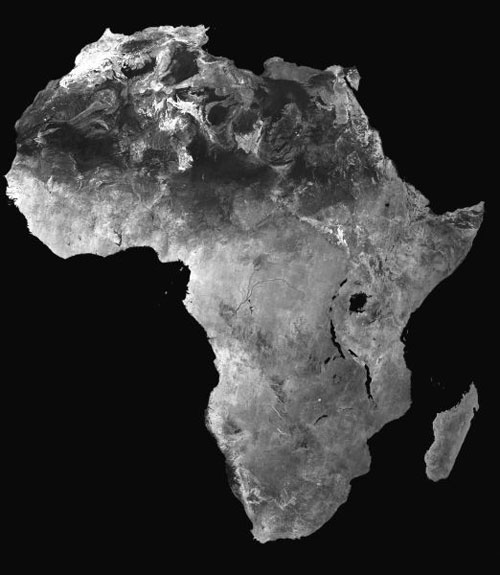